People frequently ask if they can record the police. Attached is a memo from the US attorney office saying citizens have a right to record police.

Posted by attyharden@gmail.com at 3:30 PM No comments:

This is the latest state lab with issues.  This issue is reoccurring across the country. It affects real people's lives. The findings should be based on science but increasingly the police bias has corrupted the results.

Massachusetts has charged a former criminal analyst Anne Dookhan with tampering with evidence. A second Massachusetts analyst Sonja Farak is being prosecuted for falsifying  evidence. Now Colorado is coming forward with issues.

A scientist should be independent of police agencies. In NH the forensic lab is run by the Department of Safety. The same department that contains the NH State Police and major crimes.

Labs and analysts need to be independent. As long as they are part of the prosecution team, justice will be denied. Liberty is too important to permit bias into the lab work.

Posted by attyharden@gmail.com at 10:21 AM No comments:

Eventually, the federal government needs to repeal all of its laws against marijuana use, production, and dealing.The law needs to be replaced by laws similar to those that apply to liquor. Just as it was with the repeal of Prohibition in 1933, Congress could allow states to continue marjuana prohibition by local option, or to draft their own regulatory systems 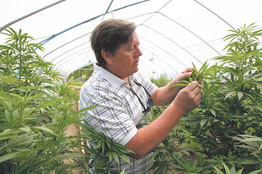